Overview: Our research blends engineering, computer science, applied mathematics, and cardiovascular medicine (more recently also respiratory flows). We use advanced computational tools in our research. Members of the lab have access to Monsoon, NAU’s high performance computing cluster, where we run most of our simulations. Our lab also has a private cluster sector in Monsoon  (in addition to public HPC access to Monsoon’s entire capacity). 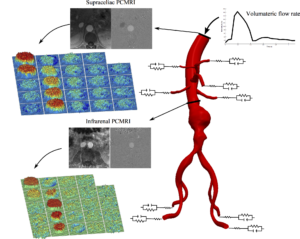 Cardiovascular disease remains the leading cause of death.  We perform patient-specific and image-based CFD simulations to obtain blood flow information, which we use in studying cardiovascular disease. Computer models are typically constructed from MRI or CT data using image processing. Boundary conditions are tuned to replicate flow rates at the boundaries. These simulations are done using SimVascular, the first comprehensive open-source software package for cardiovascular flow simulation. We also frequently use Oasis and FEniCS in developing new customized CFD and mass transport models. These open-source software are used in developing multiscale and multiphysics models of disease growth. 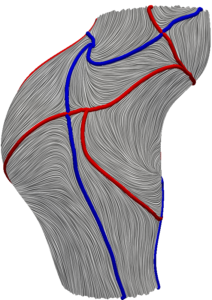 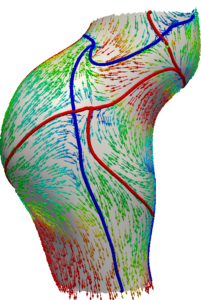 Wall shear stress (WSS) is arguably the most studied parameter in cardiovascular biomechanics. WSS quantifies the frictional drag force on the vessel wall and the endothelial cells. However, WSS also provides information on near-wall velocity. We have used this observation to study near-wall transport based on the WSS vectors. We have developed a Lagrangian surface transport model based on WSS. We have shown the emergence of Lagrangian coherent structures (LCS) in the WSS vector field. These unprecedented structures (WSS LCS) control the surface concentration patterns in cardiovascular mass transport problems. In collaboration with Dr. Guoning Chen from University of Houston-Computer Science Department, we have developed an object oriented code for Lagrangian processing of WSS data (WSS LCS, our newly proposed WSS exposure time (WSSET) measure, WSS fixed point classification, etc.).

We are also interested in exploring other potential applications for WSS LCS (such as heat transfer, turbulence, etc.).

Hemodynamics and transport in atherosclerosis 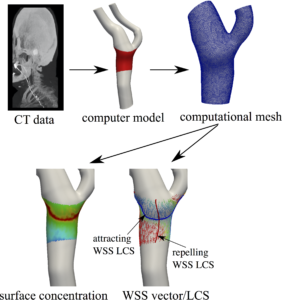 Atherosclerosis (accumulation of fatty material inside the arterial wall) is the major form of cardiovascular disease. Heart attack and stroke are consequences of this complication. We are using our novel Lagrangian WSS methodology with continuum mass transport models to study biochemical transport in atherosclerosis. The ultimate goal of this project is to build a predictive multi-scale model that can simulate the long-term progression of atherosclerosis. 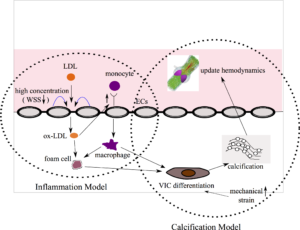 CAVD is a life-threatening disease where calcification in the aortic valve leaflets leads to incomplete opening and closure of the valve. This blocks the normal passage of blood flow from the left ventricle into the systemic circulation.  In this project, we are interested in building multi-scale models that can predict the spatial and temporal progression of CAVD. This project combines several modeling techniques: nonlinear structural mechanics, fluid-structure interaction (FSI), systems biology, growth and remodeling (G&R), and multiscale modeling. 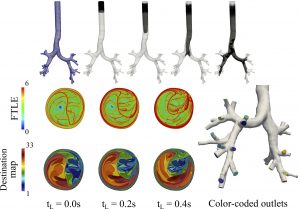 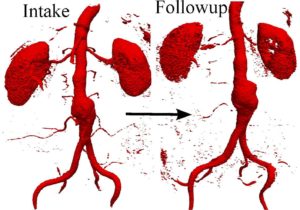 Abdominal aortic aneurysm (AAA) is the enlargement of the aorta in the abdominal level, which is a leading cause of death in the elderly. We have studied the chaotic flow topology, mixing, and transport in AAAs. We have also looked into how exercise affects the flow topology and mixing. We have correlated hemodynamics to AAA enlargement and intraluminal thrombus (ILT) deposition using longitudinal clinical data. Currently, we are interested in using new imaging techniques to correlate hemodynamics to inflammation at the wall. 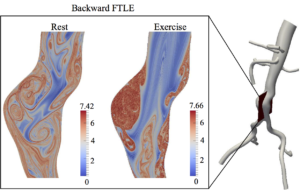